[Prevention] Would you prefer to REACT to an attacker at your front door? Or would you prefer to DISRUPT and PREVENT the attacker from getting to your front door? At speaking events, 99.9% of people raise their hand for prevention, but is that where people are putting their energy and budgets? How does an active shooter drill – teaching run, hide, fight – prevent the next shooter? It doesn’t! We’re not saying these drills aren’t important, but how are they preventing future incidents? How does a camera prevent the next shooter/shooting? It doesn’t! A camera has never stopped a gunman. How does a crisis or END_OF_DOCUMENT_TOKEN_TO_BE_REPLACED 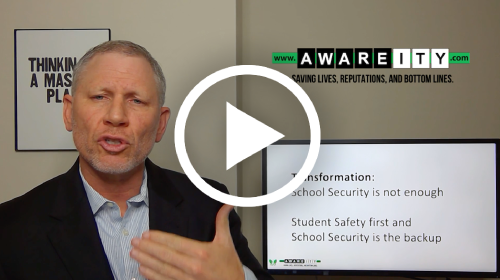 [Student Safety] Are you ready to transform and improve student safety by PREVENTING school shootings and other incidents? Watch this video. If you want to keep the status quo and keep Responding to them…don’t watch this video. Download an updated school shootings chart to compare your school’s security to others who have had incidents, how is your school any different? Warning Signs: awareity.com/warning-signs/ Client Transformations: awareity.com/transformations/ END_OF_DOCUMENT_TOKEN_TO_BE_REPLACED 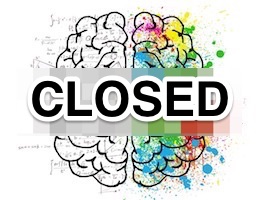 The Sad Truth: Innocent People Are Dying Because of Closed-Minded People Are you concerned about all the Sexual Harassment, Sexual Assaults, Workplace Violence, Bullying, Social Media Attacks, Suicides, the Opioid Epidemic, Violence, Mass Shootings, and other acts of evil? Are you concerned about the innocent children and adults being targeted in schools, houses of worship, businesses, entertainment venues, public streets, and other public gatherings? What I am about to say might offend some people, but the facts are the facts and ignoring and procrastinating isn’t solving these serious issues. Closed-minded people, on both ends of the belief and political spectrum, are a major reason why END_OF_DOCUMENT_TOKEN_TO_BE_REPLACED 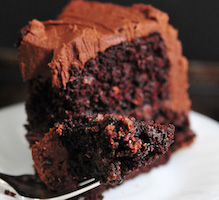 Awareity, Inc. is expanding their leadership in proven community-based prevention services and enhancing their Threat Assessment, Incident Management & Prevention Services (TIPS) platform with a new hotline/phone service option from Childhelp. Childhelp, also a leader in prevention, has been leading the way with child abuse prevention services since 1959 and a nationwide hotline since 1982. As violence continues to escalate across the Nation, it is evident that more immediate and proactive prevention solutions are needed. Community members (students, parents, employees, neighbors, etc.) almost always observe red flags and concerning behaviors prior to a violent event, but too often, this information is not shared with the END_OF_DOCUMENT_TOKEN_TO_BE_REPLACED

Awareity selected for Higher Ed Tech Decision’s Top of the Line Higher Education Products for 2015 Awareity is proud to announce that our MOAT/TIPS platform was selected by higher education end users and integrators as one of the top 15 products that made their jobs easier and more efficient this past year. The products – from switchers to digital signage, apps to podiums – enabled each user to strengthen their security tactics, revamp the ways college students collaborate, and helped keep some money in the bank. As a result, campuses have become safer, classrooms are more engaging, learning strategies are up to date, and the END_OF_DOCUMENT_TOKEN_TO_BE_REPLACED

Awareity’s TIPS Prevention Platform has been recognized for the third year in a row by K12 leaders who named it to District Administration magazine’s “Readers’ Choice Top Products for 2015.” The winners were compiled from 2,100-plus nominations from the magazine’s readers over the past year. The Readers’ Choice Top Products has been announced online and in the December 2015 issue of District Administration. District Administration’s Readers’ Choice Top Products awards program informs superintendents and other senior school district leaders about products their colleagues around the country are using to help their districts excel in a variety of areas, such as technology, sustainability and curriculum instruction. END_OF_DOCUMENT_TOKEN_TO_BE_REPLACED

Rick and Jason received great feedback from their ASIS pre-conference program that was part of the “Developing a School Security and Safety Plan for the Next Five Years,” sponsored by the ASIS International School Safety and Security Council. Experts discussed topics including risk assessments, active shooter programs, emergency planning, access control, and how technology can be leveraged to create safer school environments. Their presentation focused on how school professionals and communities can work together to “connect the dots”, looking for indicators that can be utilized to proactively prevent a future tragedy. Rick Shaw, CEO and founder of Awareity, used the investigative report from Sandy Hook END_OF_DOCUMENT_TOKEN_TO_BE_REPLACED

Post-incident reports and overwhelming evidence-base data validate most incidents (from data breaches to policy violations to violence) and tragedies were PREVENTABLE. However, even with all these lessons learned, the same common gaps and disconnects lead to more and more failed prevention efforts. Failure to “collect, assess and connect the dots” across multiple locations, departments, silos and individuals make it difficult for organizations to proactively and predictively prevent incidents, lawsuits and tragedies. Whether you are just starting your risk management planning process or reviewing your current capabilities, Awareity’s experienced team can provide the expertise and advice to improve your prevention efforts and protect your reputation and END_OF_DOCUMENT_TOKEN_TO_BE_REPLACED

Thirty-four percent (34%) of students say they are aware of an individual who poses a risk to their school, according to Awareity’s 2014 Student Safety Report. The 2014 Student Safety Report unfortunately validates that many of the same overall risks and liabilities identified last year still exist. The results reveal students observe and know about things most school administrators don’t. Students are talking about concerning behaviors (hurting others, self-harm/cutting themselves, suicidal ideations, bringing weapons to school, drugs/alcohol and other risks) among themselves, but unfortunately these valuable pre-incident indicators are not being shared with the right people – threat assessment and prevention teams. Awareity’s online student END_OF_DOCUMENT_TOKEN_TO_BE_REPLACED