How many times have you read a headline or story about an incident or tragedy and it mentioned how warning signs and red flags were missed, ignored, or not acted on?

How many times have you had an incident at your organization and found out afterward that others were aware of warning signs and red flags before, but you and your team were not aware of them?

Even though more than enough warning signs and red flags were observed, leaked, reported, and available before most incidents and tragedies, prevention efforts still failed again and again. Are you asking yourself why and how you can make a change?

Validation that many of these tragedies could have been prevented was clearly stated in a recent U.S. Secret Service report on targeted violence that cited the following:

Return on Prevention is huge and one of the best investments you can make. 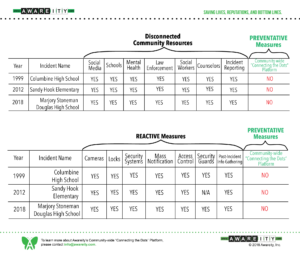 Most schools, higher education institutions, organizations and communities that experienced incidents and tragedies had made significant investments in physical security measures, but physical security measures failed to prevent the incidents from occurring. In addition to the statement from the U.S. Secret Service report above, the DHS K12 School Security Guide (2018) made the following statement:

“DHS recognizes that physical protection measures only go so far when it comes to preventing an active shooter incident. Social issues such as mental health, bullying, and criminal profiling play a critical role in the prevention of gun violence in schools. Potential warning signs are not always the result of a direct threat – more often, there is observable conduct which sends up a red flag, so to speak. The importance of detecting and addressing concerning behavior, thoughts, or statements cannot be overstated. In fact, preventing violence by detecting and addressing these red flags is more effective than any physical security measure.”

The key to preventing is not physical security measures, it is collecting and connecting the red flags and warning signs so the right people can do the right things at the right times to intervene and prevent.

So why is prevention failing so often?

Research reveals there are way too many common and dangerous gaps, silos, and disconnects that lead to failed preventions. Making matters worse, more and more gaps, silos, and disconnects are being created with every new incident reporting “solution” (state hotlines, state websites, non-profit hotlines, new apps for organizations, new apps for communities, new text lines, and others), new case management systems, and other new silo systems that add to the numerous silo systems already in existence across organizations, local agencies, law enforcement, and communities.

Proven and results-based prevention solutions and solution models for schools, higher education institutions, healthcare, financial, local government, other types of organizations and communities are in place and delivering real-world prevention.

So why is the prevention platform needed?  Think about it this way, what if a SWAT team or surgical team had training but neither team had the right tools?  They would fail again and again.  It is the same for your prevention teams (TAT, BIT, BAU, WPV, Safety, Risk, etc.), even with the best training, they will fail at prevention again and again without the right tools to eliminate the common gaps, silos, and disconnects that every organization and community is struggling with. And now that you know the missing link and the key to preventing is using the right tools, contact Awareity for a demonstration today.