Who Ya Gonna Call? GAPbusters!

The Ghostbusters became heroes when they waged a high-tech battle with the supernatural after they stumbled upon a gateway to another dimension that could release evil upon the city. The Ghostbusters saved the day by zapping the gateway with their high-tech proton packs, blowing up the Marshmallow Man, and eliminating the gateway so evil could no longer enter the city.

Ghostbusters, of course, was a movie, however, in the real world today there are many parallels as organizations must zap the gaps that again and again allow acts of evil, incidents, and tragedies to enter their organizations and communities.

Movie vs. the Real World

It’s no secret that acts of evil, workplace violence, school violence, community violence, gangs, drugs, sex abuse, human trafficking, suicides, bullying, cyberbullying, and other incidents are occurring at alarming rates.  What’s especially troubling though is that even though more than enough red flags and warning signs are almost always available BEFORE the acts of evil, incidents, and tragedies still occur.

So the obvious real-world questions are… 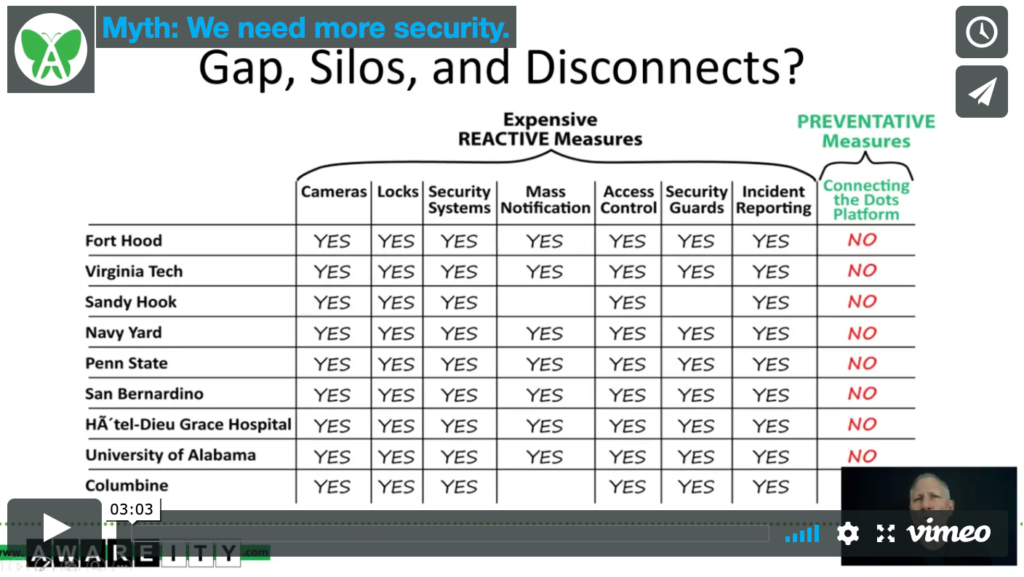 The answer is revealed in reverse engineering years of research and years of overwhelming evidence… it’s the GAPS (including silos and disconnects) that make proactive preventing nearly impossible given how prevention efforts are currently approached.

Ghostbusters saved the day in the movie by being trailblazers and the Awareity GAPbusters are saving the day in the real world by being trailblazers for prevention. We are saving lives, reputations, and bottom lines by creating partnerships with organizations and communities who are ready to utilize high-tech strategies, analytics, and award-winning tools to zap the gaps, silos, and disconnects so evil doers and attackers can no longer slip through and so at-risk people in need can be helped sooner than later (when it’s too late).

Awareity’s GAPbustsers help eliminate hundreds of common and dangerous GAPS that exist in nearly every organization and community… ready to become a GAPbuster?

Not seeing the form to connect with us? Email us directly!